Spit and Polish @ The Laird

Thursday nights at the Laird are "Spit and Polish" at the Laird. The leathermen were out and it was a good night of fun and even better for us since we just had to walk downstairs into the bar from the second level where we were staying! 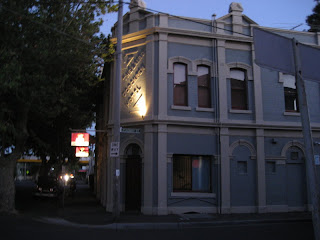 The postage meter was purring as Eric announced that the front bartender was giving him free beer all night (and if you read the previous posts about the price of alcohol you know that free cocktails are a BIG deal!)

Eric was "tired" later in the evening when I decided to check out the bar down the street - Sircuit. Thurs night had a small, but ok crowd but it was dead by the time I arrived at 1am.

Being guests of the laird, we get free access to the sex club (not a bathhouse) down the street - Club 80. Since I was right there I decided to stop in (admission is usually around $17). Well I'm glad it was free as the place was practically empty. However, wow...amazing. It's in an old warehouse and it's incredible. They must have spent a fourtune on that place. It's very industrial but the layout is amazing and it's huge. There are several floors, and it's hard to describe but it felt more like a bar than a sex club in the fact that there was so much attention to decor and detail that it was amazing. I wish I could have taken some pictures.

Anyway...strolled around for a bit and then headed back to the Laird for the night..
Posted by Ken at 10:15 AM