Saturday started off early with a 7am pick-up for the Great Ocean Road tour. Eric doesn't get moving until around noon so he was a bit tired in the morning as we waited for the tour bus to arrive. 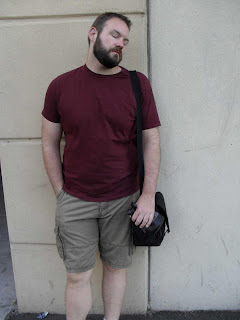 We were introduced to Lee, our tour guide for the day, who had several piercings and was wearing a leather wrist band on his right wrist. Once we were all aboard he introduced himself and announced that were were in for a fun day as he's not a shy one - former DRAMA major. We instantly knew this was going to be an interesting tour. 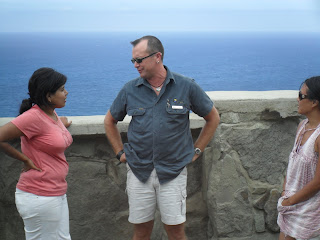 As we drove along the coast we were treated to many gay anthems to mark the journey. Lee also told us that, fittingly enough, the name of our bus for the day was Priscilla! (no, I didn't just make that up).

The Great Ocean Road is one of Australia's most spectacular scenic drives. Along the dirve you will be witness to the world famous Twelve Apostles, the Otways rainforest, and legendary surf breaks, but also lovely resort towns like Torquay, Lorne and Apollo Bay, and the historic villages of Queenscliff, Port Campbell, and Port Fairy. 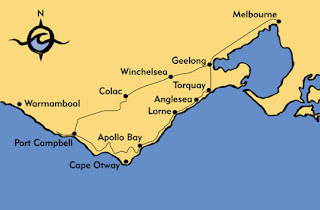 Started in 1918 and finally completed in 1932, the Great Ocean Road was all done by hand using picks, shovels and dynamite. The project was dedicated to those who gave their lives in WWI and it remains the world’s biggest war memorial. Until the road was built, the small coastal settlements were only accessible by boat or rough inland roads. Coach tracks were built along some sections, but these were never linked and were impassable in bad weather.

The Great Ocean Road officially starts at Torquay, although many decide to stop by Geelong first to discover Victoria’s second largest city. Geelong has beautiful beaches, delicious eateries and a fascinating heritage.

The section from Torquay to Lorne is known as the Surfcoast. It’s a surf heaven for experienced surfers, but also a great place to learn surfing. The famous Bells Beach, featured in the final scene of “Point Break”, is a much-loved icon of Australia’s surf scene. The Rip Curl Pro, part of the ASP World Championship Tour, is held here every Easter. As we drove the coastline we passed the corporate office of Rip Curl and many other surf and sea companies.

While we were driving through Lorne the driver pointed out that today was the Pier to Pub swim so we would encounter a little more traffic than usual.

Pier to Pub
Dive in with 4000 other swimmers in the world's largest organised swim.Each year thousands of swimmers dive into a sea of history and race the 1.2 kilometre course of the Lorne Pier to Pub, which started as an informal challenge among Lorne Surf Life Saving Club members.
It’s now an action-packed weekend attracting people from near and far to both participate in the race and soak up the carnival atmosphere.

Over the past 29 years the event has grown in size and stature and now claims centre stage of a two day program that includes the Mountain to Surf Fun Run and Surf Boat Race Classic.
Since 3071 swimmers took to the water in 1998, the swim has been entered into the Guinness Book of Records as the world’s largest open water swim. 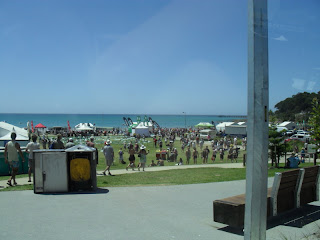 The road between Lorne and Apollo Bay is an area of great natural beauty. You can admire the ocean on one side and the forests and mountains of the Otway Ranges on the other. The Otways are a fantastic inland excursion and a definite highlight of the area boasting a superb national park and a magnificent tree top walk.

Eric really wanted to touch the water while in Australia so he got his chance: 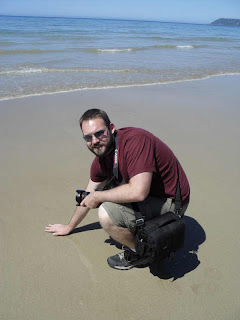 Sections of the road are extremely steep with extreme curves. From what we are told several Americans die each year trying to drive the coast because they aren't used to driving on the "other" side of the road. We are glad we took a tour bus. 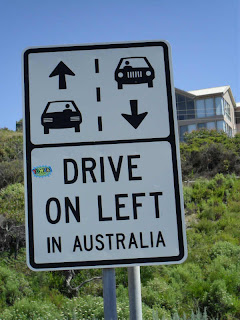 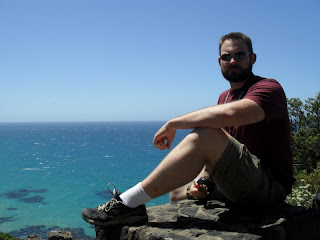 The section near Port Campbell is probably the most visited section of the Great Ocean Road because of its striking and dramatic natural rock formations. These formations include Loch Ard Gorge, the Grotto, London Bridge (renamed to London Arch in recent years after the ‘bridge’ partially collapsed), and the most renowned Twelve Apostles.

Between Moonlight Head and Port Fairy is a treacherous section of coast that has claimed more than 180 ships and earned it the name Shipwreck Coast.

Here are some of the pictures from out adventure: 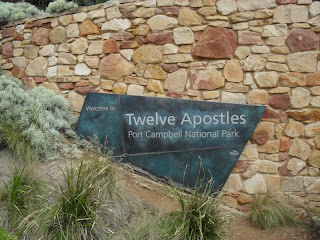 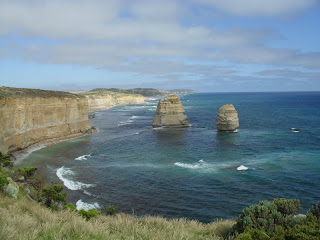 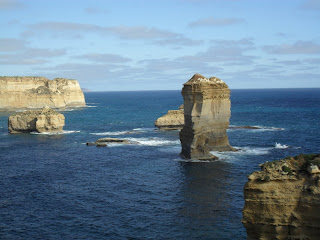 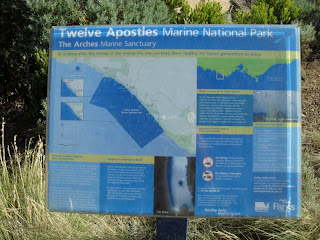 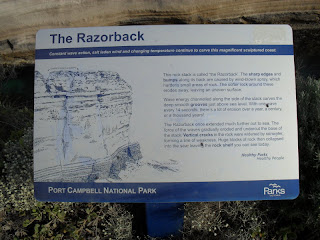 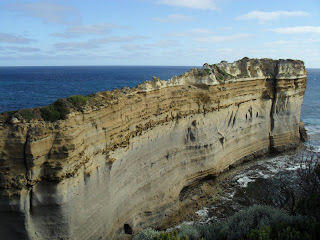 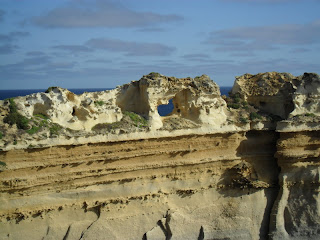 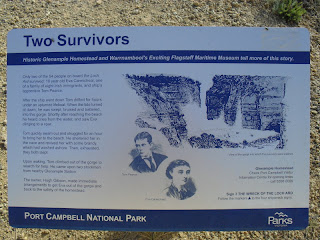 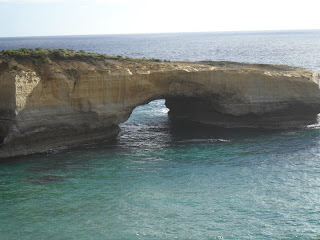 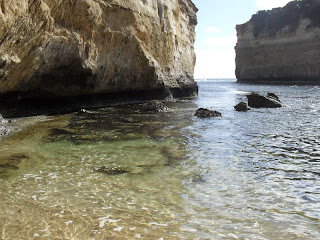 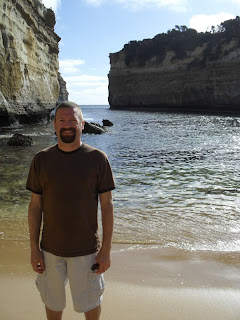 We finally returned to the hotel around 11pm that evening...what a LONG day but the scenery was amazing...and the village people, Vanessa Williams, Celine Dion...etc were blazing from the speakers as we returned home.
Posted by Ken at 11:14 AM