Arrested and imprisoned...for a few minutes 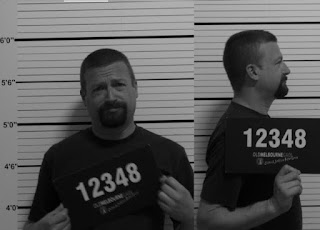 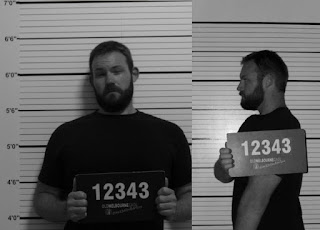 We've had a busy busy trip here in Australia, and as we approached our last full (non-travel) day here we decided to have a slower paced, easy day. After enjoying the opportunity to sleep in a bit, we headed off to our one and only touristy activity for the day: the Old Melbourne Gaol (aka. Jail). It was the winner of the 2009 and 2008 Victoria Tourism Award, so it had to be good, right?! Here is the quick low down on the City Watch House Tour that we took:

Have you ever wondered what it would be like to be arrested?

The Watch House Experience is a forty minute interactive experience like no other. With a Charge Sergeant as guide, visitors are ‘arrested’ and encounter what it is like to be locked up. Nothing has changed in this minimalist site since the police and inmates left in the 1990's. After the role play, visitors self guide through the watch house taking in sound points and multi media imagery that is educational and informative. 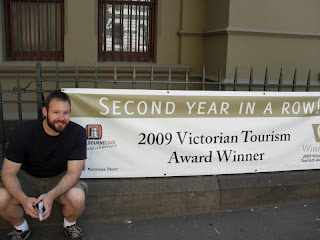 Awards being what they were, we became further assured we were in for a treat when the lady out front said "You're going to do the 3:45? That's great! You'll get Wendy...she's a huge bitch!". She wasn't lying, Wendy certainly filled the role of cruel warden quite well. Favorite verbal abuse of the afternoon? A woman in our group of inmates walked in with her half-eaten lunch...and Wendy went off. "Get around the corner and finish stuffing your disgusting face!" she ordered. A little later when the woman looked around the corner to see what was going on, Wendy barked again, this time declaring that the woman was a filthy sow. And so it went, for the next half hour. We were verbally abused, ordered around, disciplined, and otherwise made to feel like we were really being imprisoned prior to the jails closing in 1994. I adapted, learning to stay out of the wardens way and using the facilities provided... 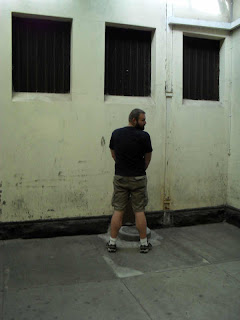 ...Ken, on the other hand, has been severely traumatized by the experience. I have the feeling some therapist in Chicago is going to make a pretty penny trying to undo the damage inflicted by Warden Wendy! 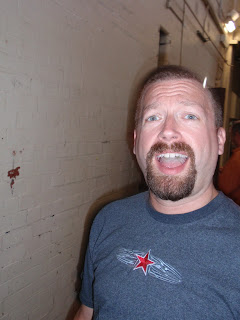 In all reality, Wendy turned out to be a very nice, cheeky actress and was a lot of fun to watch. One thing that still has us confused though, is that for photo opportunities with her, she insists that she be arresting you in the photo. Her version of arresting, however, consisted of her getting us on our knees, putting our heads in her bosom and then petting us while insisting "You're enjoying this, aren't you?"... 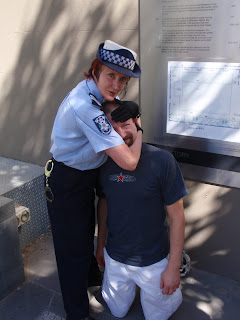 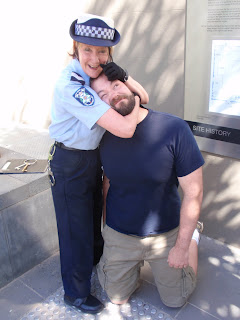 Anyway, back to the hotel we went. The local rugby team was having a fundraiser BBQ downstairs at the bar. It wasn't a huge crowd, but it was a good one! We enjoyed a few drinks with the group, then headed off to our last Melbourne dinner. Finishing off the evening with some laundry and packing, we're ready for our 11am flight back to Sydney in the morning!
Posted by Eric at 10:44 PM