We are back from getting (sort of ) close to the Sydney Harbour fireworks.  With an estimated 1.6 million people, our 3 hour lead time wasn't enough to secure spots close enough to view the entire spectacular.  Instead, we caught the high air show, not without obstruction.  It was a long wait, but now we can be happy in saying we saw the NYE fireworks here.

Here we are waiting... 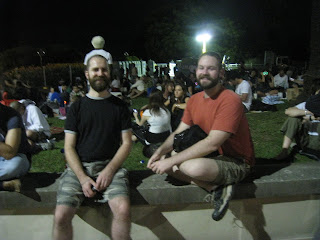 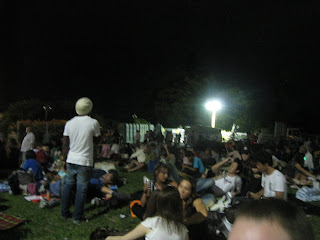 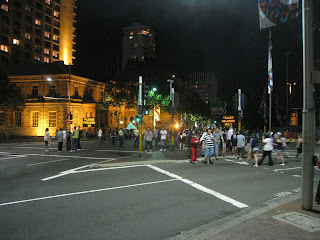 Afterwards, we raced home and changed into appropriate attire for the aforementioned Saddle Bar bear party..... 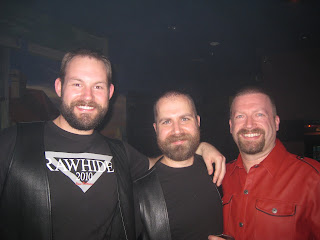 What a party it was.  The bar was packed with woofy, shirtless, leathered, beardy bears.  So friendly to the obvious foreigners.  (We ordered Eric's vodka-7 only to be corrected with "you mean vodka lemonade?")

It's in our (good) nature to be prickly and proddy about who gets more attention at a bar.  Usually, it's our very own "pretty-bear, circuit bear" Eric who garners the most flirtatious advances and friendly "G'days." Tonight was no exception.  However, to begin, it was Ken in the lead with a 411 hit, outrun after the first round of cocktails when a handsome silverback approached me with the line, "I think I saw you on Oxford Street this afternoon." He then admitted he was the bus driver that cruised me while DRIVING his bus.  It's true.  We did witness said rubbernecking.  He (another Eric) was sweet and friendly.  We're happy he didn't wreck the bus.

The evening went on with several more rounds of (pathetic and wimpy miniature cocktails for AUS $6.50!) On the corner of the dance floor I insisted that "Squishy Bear" (a hottie traffic wrangler from the fireworks earlier in the evening on MacQuarrie Street) was standing next to us.  I wanted to approach him and ask if it was indeed said cruise director, but chickened out after a chorus of "it's not him" from my cohorts.

Next, it was Eric's turn.  The super-fine goateed daddy introduced himself to Eric and they chatted the night away.  (Ken, insert photo here.) (Ken says...Photo Below)... 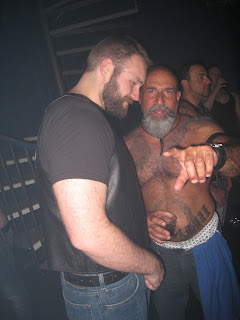 We all met each other, including Daddy's adorable little man and had a great time laughing and whooping it up.

If this sounds like a crock of sh*t and a cover for someone, you may be right.

All I can say is that the three of us all left together and hit Hungry Jack's (the Aussie equivalent of Burger King) before retiring to our own rooms.  Alone.  Seriously.  No foul play here tonight, just some friendly banter and a bit of beard petting.

P.S. Dear Burger King: If you made a veggie burger like the one they serve here in Oz, I would be your humble servant for eternity.  It seriously rocks my world and kicks the ass of the McVeggie nasty burger.  Please.  Import this WONDERFUL product.(Ken: PS Hungry Jack - NO HAM ON MY BURGER PLEASE! Ewww)
Posted by Michael at 4:37 AM